The artist Antoni Hervàs received a commission from the Fundació Joan Miró to design a family workshop based on the theme of self-organization as part of the exhibition with the same title curated by Antonio Ortega, which provides an overview of DIY art practices from the 1960s until the present.

Hervàs tells us about the process of conceiving and creating the SpaceFest (La festa espacial) and the connection between the activity and self-organized practices, from the original idea to the implementation of the workshop with its participants. The SpaceFest is one of the most recent events in the line of family activities created by artists at the Fundació. 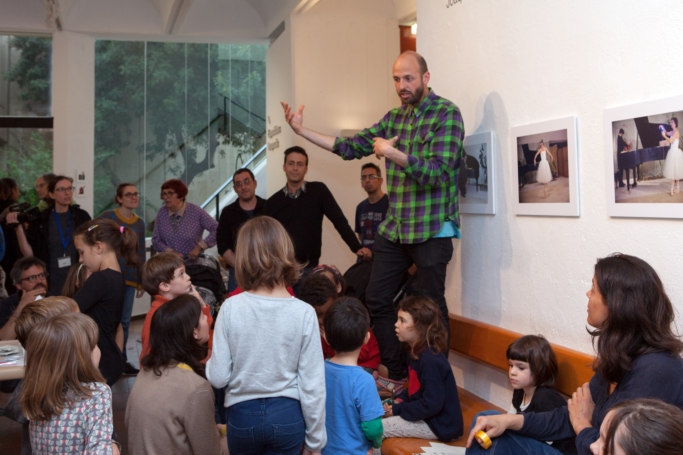 Designing an educational project that views a workshop as an experimental space where knowledge transfer and self-education occur through personal experience. This exercise in assemblage aims to gather general information and personal thoughts around the exhibition, engaging in a dialogue with the spatial and emotional features of the place where it unfolds.

As the event was supposed to be a large-scale family activity including children of many different ages and interests, I wanted to build a narrative that was articulated by an itinerary and, using performativity, lead it to become a self-organized group in which each participant could relate freely with the whole in whatever way he or she felt most comfortable.

When Familimiró asked me to design the workshop, I had just attended the presentation of the catalogue, which was published almost a year before the show opened. Ortega had asked Pere Llobera to paint the images he wanted to use as illustrations for the publication, in a clever gesture aimed at avoiding the cost of their reproduction rights. Obviously, the cost of the commission would be even higher, but this attitude of making something yourself when you can’t or don’t want to get it elsewhere reminds me of a paper cut-out of the Fundació Joan Miró building published in Barcelona in 1985 by La Ciutat de Paper.

David Bestué and I had considered using this element for Mercury Splash (the tribute to Alexandre Cirici i Pellicer held in June 2016), in which a stripper dressed as a pizza delivery man was supposed to appear in the courtyard of the Workshop Space, put on his show, and then stay on to assemble the paper building. This urge to recycle and use the resources at hand is one of the key premises of my work. In visual and formal terms, this entertaining object has become obsolete; emerging from the commercialization of the DIY movement, it allowed you to appropriate the institution using a fragile, ephemeral material, which in some cases the most avid collectors have kept intact. To describe it as a retro object implies a leap in time, an anachronism to which it was not subjected when it was initially produced. However, why speak of self-organization in terms of the future and durability in any way other than as science fiction? 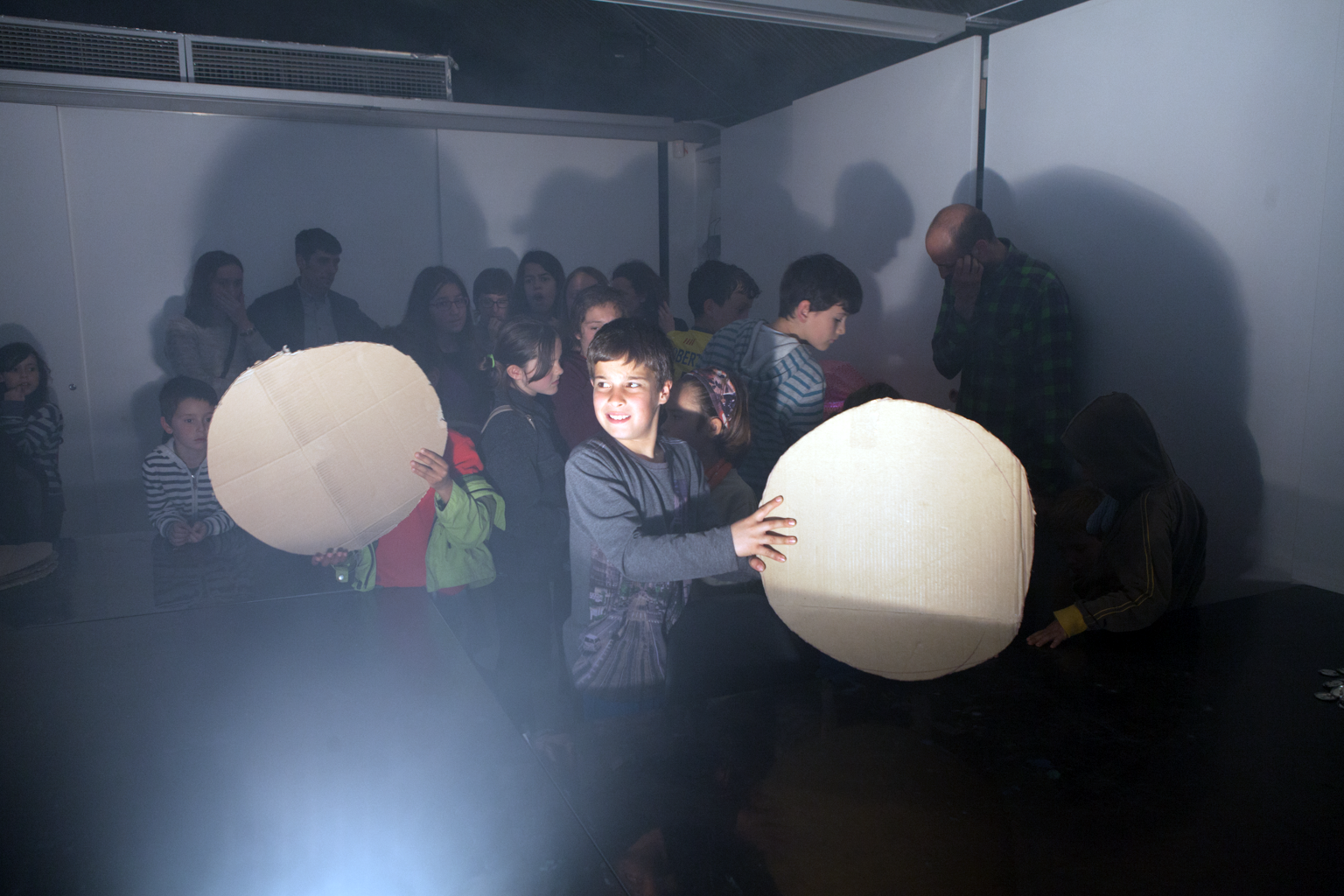 These projects stem from a pressing need to make and to share, and are sustained with enthusiasm while they constantly toy with the possibility of disappearing.

I remember a footnote that Mariona Moncunill had added to a wall panel written by Antonio Ortega, pointing out that these projects or models that reject institutionalization have ended up in a museum. Self-organization is a form of activism, but sometimes it can also be the product of a strategy. In this case, it projects into the future as a potential reality. 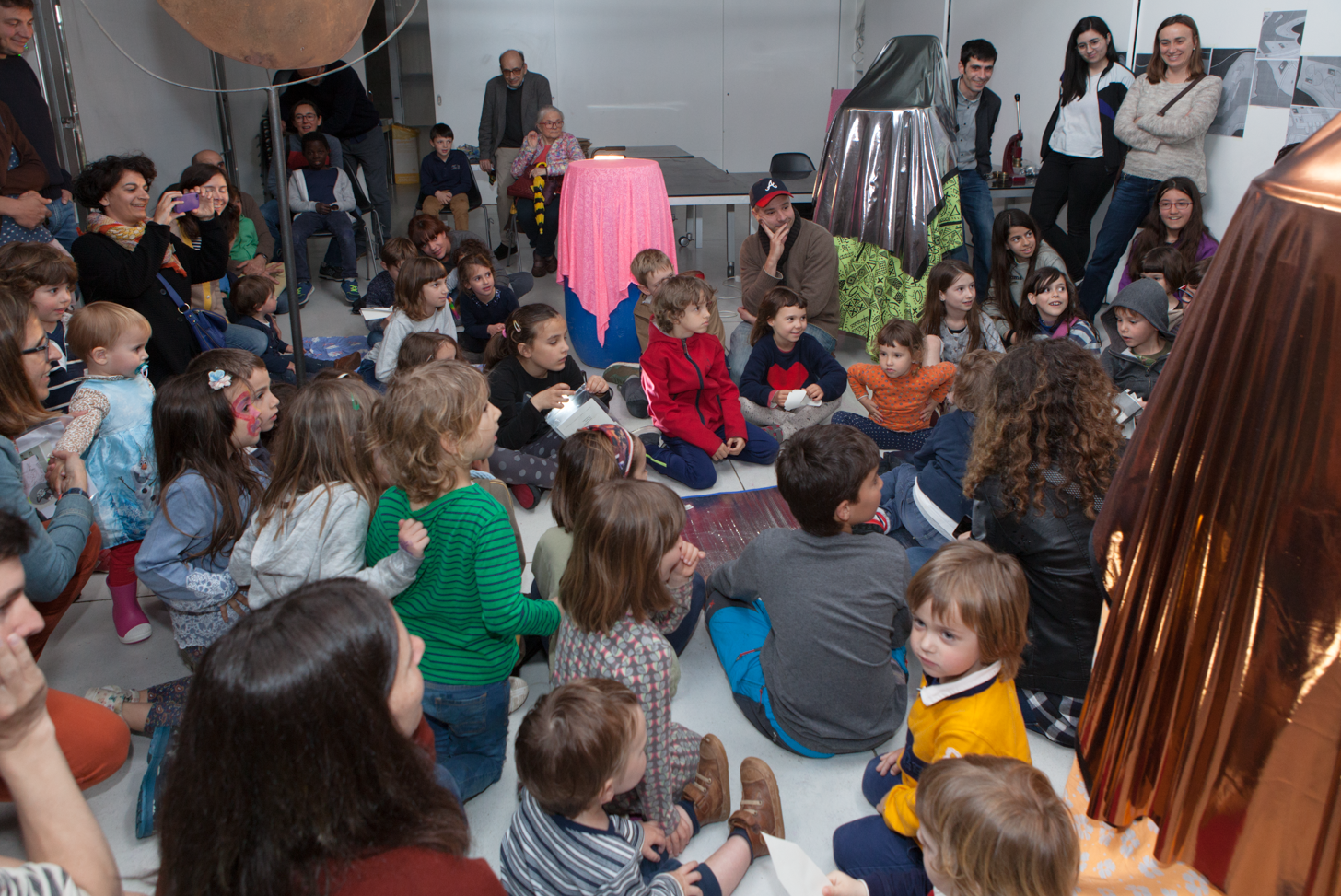 ‘The SpaceFest’, the Festa Espacial in Catalan, is a play on words: ‘festa’ (fes-te, fes-t’ho, ‘make it yourself’) and ‘espacial’, which applies both to architectural and galactic space (This could be the caption for one of the images).

I remember a workshop that Serafín Álvarez and I held at La Factoria de Sant Andreu. It addressed the issue of fans, observing that fan communities didn’t just consume, but could also generate contents about a subject. An example was Star Wars Uncut, a remix of contributions from fans who reproduced the galactic saga with homemade video clips lasting just a few seconds each. The resulting piece was a brilliant, crazy assemblage of uploaded tributes. And the brilliant fragment produced by Serafín with an audio track provided by the kids in the workshop was a part of it. This is how the story began:

‘A long time ago, in a galaxy far, far away, there was a group of rebels fighting against the system known as the Self-organizers. To pass unnoticed, these women used parts of institutional structures and assembled them in a way that allowed them to move stealthily through the rigidity of the Powerful. But some of them, seduced by their disguise, were lured into the dark, enticing future. A group of bold insurgents met on 1 April to change the course of history.’ 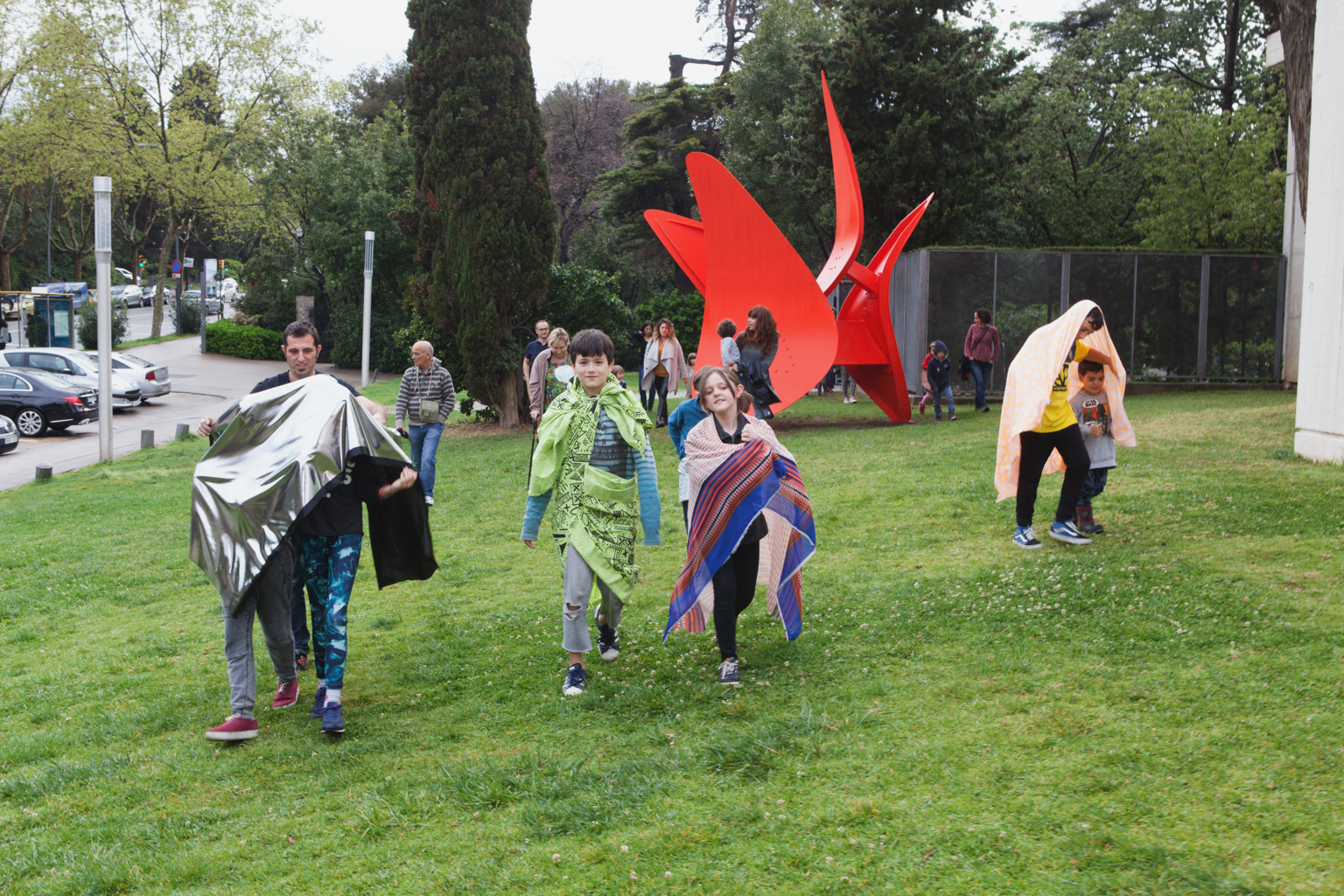 To get the kids engaged in a complex story, I needed to convey the sense of an epic adventure. The event would begin like a regular, conventional workshop and then suddenly an element or a conflict would appear, changing the dynamics completely. Therefore, it was essential to have a striking, hypnotic element make its appearance and lead the group through the space. That would enable me to follow the group and stay in my role as the narrator without having to be up at the front all the time. That is why we tracked down the amateur choir Les Coralines, self-organized by a group of mothers from the El Sortidor civic center. 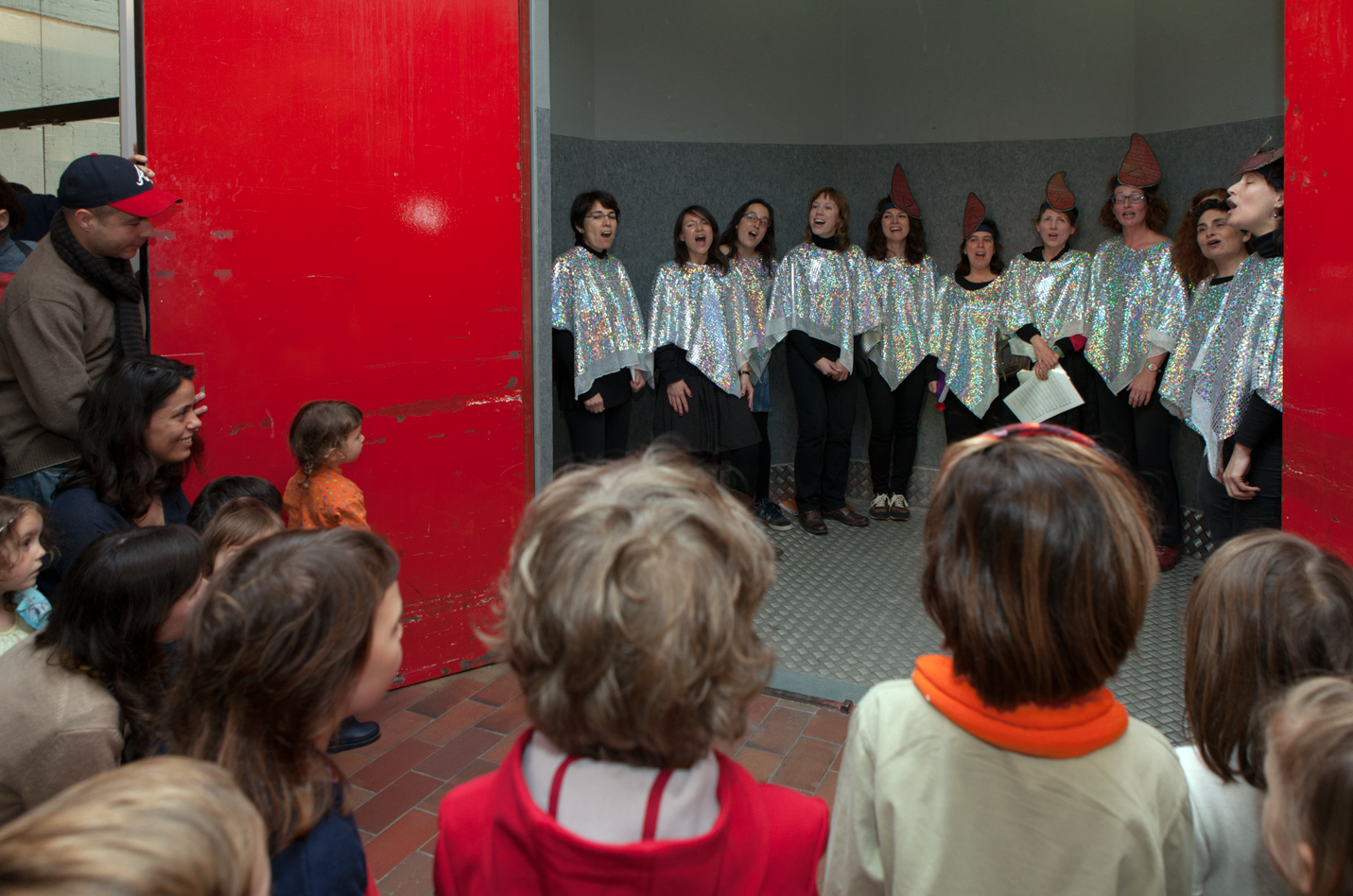 The day we went to visit the choir, we had agreed to meet Mercè at the Plaça del Sortidor in the Poble Sec neighbourhood. As we climbed the stairs, we started to hear the voices that drew us up to the second floor, where they were rehearsing. We had goose bumps as we witnessed the strange sound invasion of an everyday rehearsal, impervious to everything that was happening around it. Thrilled, we told them about our project and said that we needed this group of galactic Valkyrie to sing three songs: a mystical one for their entrance, one to create a strange, mysterious atmosphere, and a last one with an epic spirit (something along the lines of the soundtrack for Picnic at Hanging Rock). They accepted the proposal enthusiastically and selected the songs they thought might fit our needs. They even showed us one marvellous one that had the element of mystery we were looking for, but they were sorry to say that they had just started rehearsing it and wouldn’t be ready in time. Realizing that their time was very valuable, we suggested to hold the rehearsal directly at the Fundació, so they could devote the time they were spending with us to do something else that would be truly useful for them: learn the song. We could stop and repeat it as many times as they needed; their role allowed them to do so.

This flurry of activity required the help and collaboration of Ramon and Xavi. I was already familiar with the Fundació after Mercury Splash, so we walked through the entire itinerary, rifled through the available materials and considered the potential of each and every corner with the resources at our disposal. Given the forecast of stormy weather on the day scheduled for the workshop, we created an alternative indoor itinerary as well.

Les Coralines marked the beginning of the sequence before leading us to take the spectacular freight elevator up to the Workshop Space. Donning galactic uniforms and cut-out hat versions of Calder’s sculpture, they sang ‘Heaven’ as they led us to the realm of ‘Las Chapas’. To travel to the future and try to recover the Self-organizers, we had to project ourselves into the time we wanted to go to and issue our own passports with portraits of ourselves when we were older. In the room there were manipulated photocopies of the cut-out that made up a comic where we saw the long-lost Self-organizers in a retrofuturistic psychedelic world.

Returning to the Fundació, now legally, we had to take the last step: dress up like the future. We had taken all the conservation and art shipping materials we could get our hands on and spread it out in the auditorium, where we handed it over to the participants so they could use it to make costumes. Bubble wrap and brown, white, and shiny wrapping paper. Everything was orchestrated, while Les Coralines rehearsed the song and provided the musical theme. It was a marvellous, self-organized chaos that I would be incapable of describing. 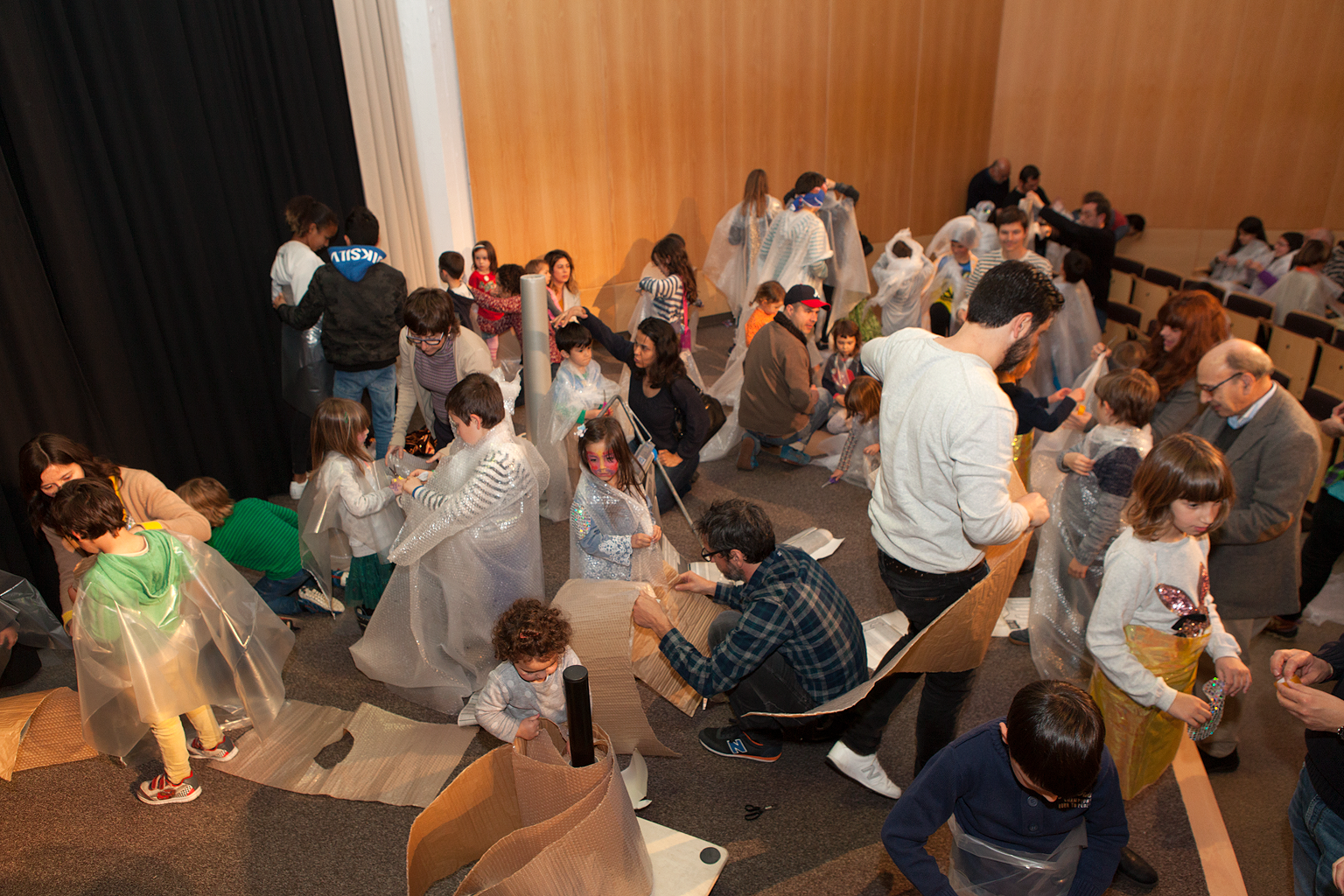 The last step was to start up the vehicle that would allow our friends the Self-organizers to travel back from the future so we could all return home. Together we exited the auditorium in full regalia and climbed the narrow staircase in single file until we reached the library, where an installation had been set up with the industrial fan that is used to ventilate the exhibition spaces when the walls are being painted. Strips made of the same materials as the intrepid participants’ costumes were attached to the fans, and fluttered while Les Coralines sang the last epic song. In this futuro-folk parade of sorts, we all said our goodbyes. 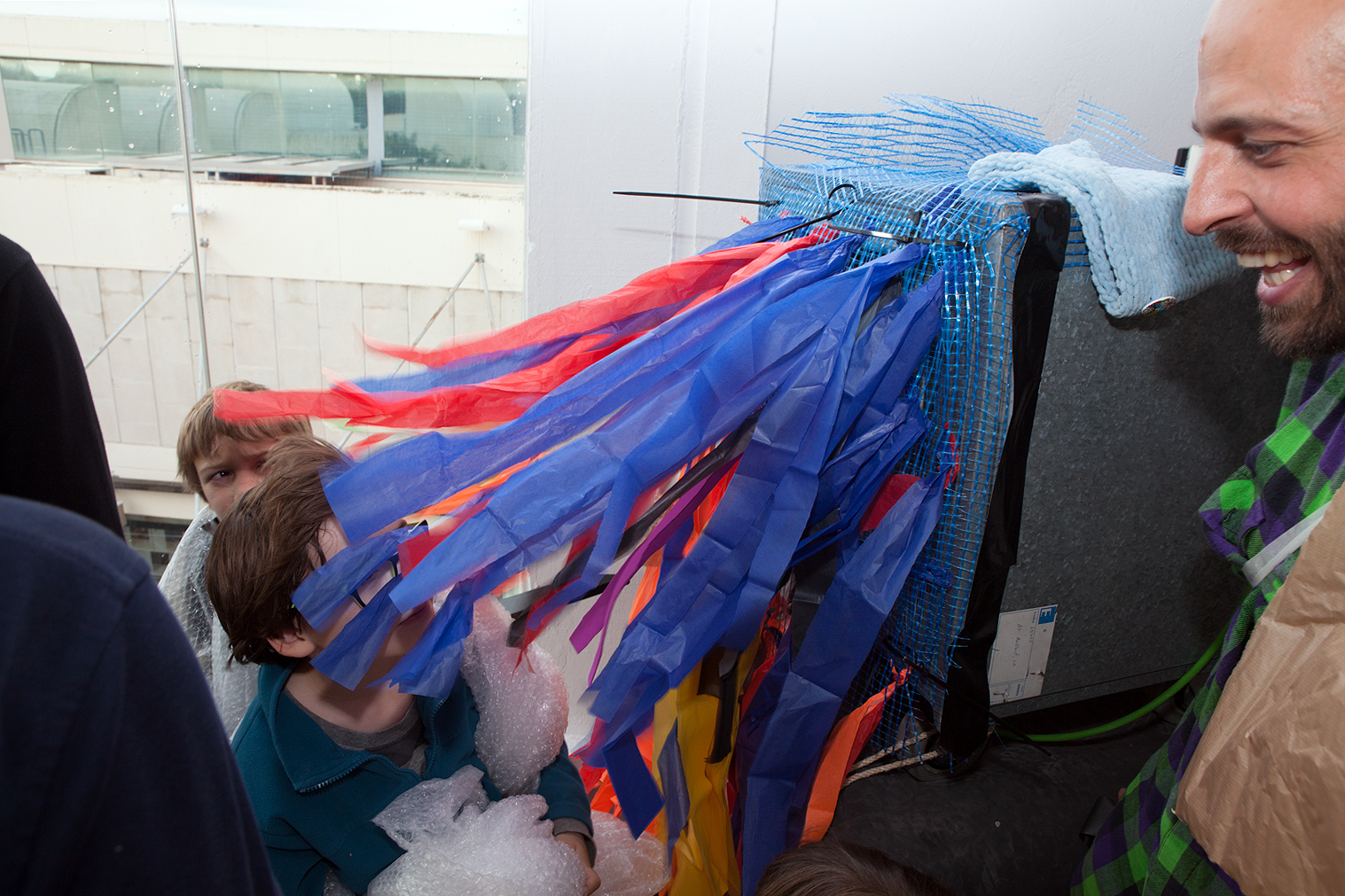