Morning star is one of the 23 Constellations that Miró painted from 1940 to 1941, following his desire to escape from reality right after the outbreak of World War II. This group of pieces conveys an idealized vision of a world of celestial beings. Since its creation, the series has been shown almost in full on three occasions in New York.

Now, Acquavella Galleries has managed to bring together the nearly complete series in the Miró: Constellations show that will be on exhibit from 20 April through 26 May, 2017. Art historian and FJM assistant curator Ester Ramos describes this gathering of the Constellations as a historic event and tells us about the importance of this series in the life and work of Joan Miró.

Morning star is Constellation number 6; it belongs to the Fundació Joan Miró and was a gift from Miró’s wife Pilar Juncosa. While this painting has joined the others in the series shown at Acquavella Galleries, the Pace Gallery is holding a simultaneous exhibition, Calder: Constellations, displaying a series of sculptures by Alexander Calder. 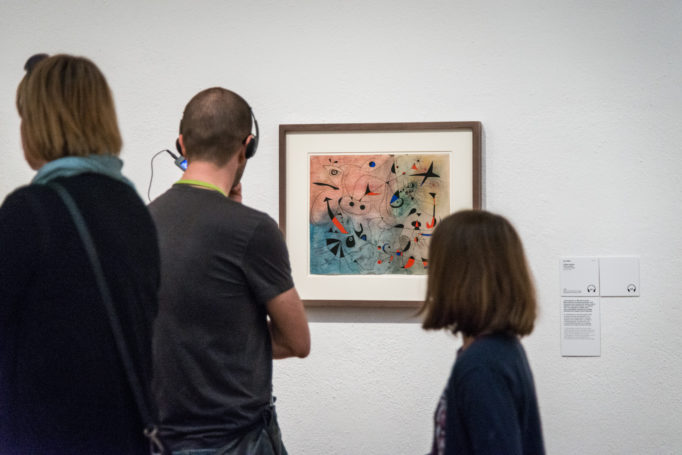 When World War II broke out, Miró sought refuge in Varengeville-sur-Mer, a small village in Normandy. There, in January of 1940, he began a series of works on paper in which he acknowledged ‘having reached a high degree of poetry.’[1] That same year, in a letter to Pierre Matisse, his art dealer in the United States, Miró announced: ‘I am now working on a series of fifteen to twenty paintings in tempera and oil, dimensions 38 x 46, which has become very important.’[2] This group of works would eventually lead to the series known as Constellations.

The scarce means available during the war years drove Miró to work on these ‘paintings’ on paper and using a small format. Despite this fact, he immediately identified them as masterworks, as great and transcendental as his most important canvases.

When the German troops invaded France, Miró and his family decided to return to Spain. They agreed that his wife Pilar would be in charge of their daughter and Miró would concentrate on the gouaches he produced during his stay in Varengeville-sur-Mer. He worked on the next ten paintings in Palma de Mallorca, and later, in the summer of 1941, completed the series in Mont-roig, in rural Tarragona, producing a total of 23 gouaches.

Miró avoided facing the dreadful circumstances of those times by plunging wholeheartedly into these paintings, which were gaining huge relevance within the ensemble of his work. According to André Breton, these gouaches configured the first series, in the highest sense of the term, that Miró had produced until then.[3] They all shared identical supports, measurements and technical methods, as well as the same pictorial language.

As a result of the concentration he experienced during his isolation, first in Varengeville-sur-Mer and later in Palma, his Constellations allowed Miró to consolidate a new language of signs: ‘I felt a deep desire to escape. I closed myself within myself purposely. The night, music, and the stars began to play a major role in suggesting my paintings […].’[4] Symbols gradually invade his pictorial compositions: the firmament, the sun, stars, birds, women, lovers… The sign is the main protagonist, the key to a new vocabulary that would prevail in Miró’s work from that moment on.

At the same time, through the Constellations Miró recovered his powerful connection with poetry, which had been apparent in his poem-paintings from the mid-1920s. The artist gave each one of the gouaches in the series a poetic title that was marked on the back of the painting. From the very first moment, Miró wanted to be able to show his Constellations together, hung in the order in which they were produced and visible both from the front and from the back. The idea was that the title, ‘written in the form of a sketch for a poem,’[5] could be contemplated on an equal level with the painting.

Morning star and the back of the painting

Unfortunately, the first time the series was exhibited, at the Pierre Matisse Gallery in New York in 1945, Miró was in for a disappointment: only 16 of the 23 gouaches were shown. Nevertheless, the show was a huge success, attaining, according to Pierre Matisse, ‘an unprecedented degree of poetic intensity, and in colour as in the line a dazzling mastery.’[6] The exhibition also had a powerful impact on young American artists. Some of them, like Jackson Pollock, saw these paintings as the key for exploring their own symbolic universes, while also providing a new understanding of painting breaking the physical boundaries of the canvas.

Again in 1957, an attempt was made to gather the greatest possible number of Constellations in one venue, but once again, the result was not what Miró had hoped for. It was not until 1993, the year of the centennial celebration of the artist’s birth, when Carolyn Lanchner, the curator of the Joan Miró retrospective at the MoMA in New York, finally managed to bring the 23 gouaches together.

More than twenty years have past since the MoMA showed the complete Constellations series for the first time in the history of contemporary art. Now, during the next month, Acquavella Galleries will be showing it again, almost in its entirety, in its venue at 79th Street between Madison and Fifth.

We wonder whether it’s a coincidence: the number 23 and the years that have elapsed since they were last shown together. The fact is that Acquavella Galleries has accomplished the praiseworthy goal of gathering almost the entire Constellation series under the New York sky again. The Constellations series was, for Miró, ‘one of the most important things I have ever done.’[7]