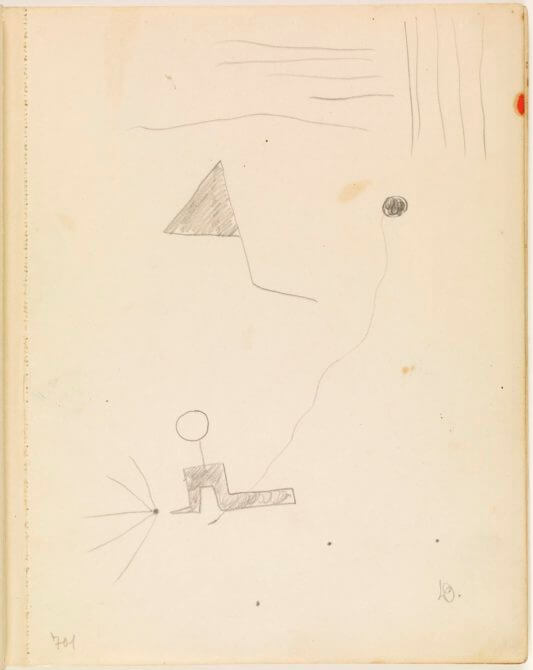 ‘A piece of thread can unleash a world,’[1] said Miró to express that a blotch, a splash, or a point on a sheet of paper could release an entire creative universe.

In the blog we are opening today, we would also like a concept to be the point of departure for further exploring and opening up new themes that will enrich and complement the original contents.

Miró produced the preliminary sketch for The birth of the world in one of his sketchbooks in 1925. Based on this drawing, the artist developed others using the imprints left on the following pages, which in turn led to other pieces. The final work stemming from this sketch is part of a group of pieces titled Painting, which feature carefully crafted monochrome grounds. In the case of The birth of the world, the ground has soaked-in stains and paint dripping in different directions, probably due to the canvas being moved while the paint was still moist. On this elaborate ground, Miró places the flat figures he had planned in his preliminary sketch.

Three more drawings follow this first piece, each stemming from the imprint of the pencil pressed onto the paper for the former drawing, allowing the element of chance to determine the outcome of the work. The shapes and signs Miró created on each sheet appear as an attempt to reject all conventions and open up to a new language.

A pencil mark on paper suggested countless new forms that in some cases germinated into new projects. Likewise, the activities and projects that come out of the Fundació will offer an inspiring point of departure for the different authors whose voices will contribute to this blog, providing new perspectives on each subject from a personal angle. Every article will essentially contain the original theme. They will be thought-provoking texts that will lead us into new territories; as Miró would say when he looked at a piece, ‘The painting must be fecund. It must give birth to a new world.’[2]

Note: The Fundació team produced this article using pair writing, a technique for collaborating on content.