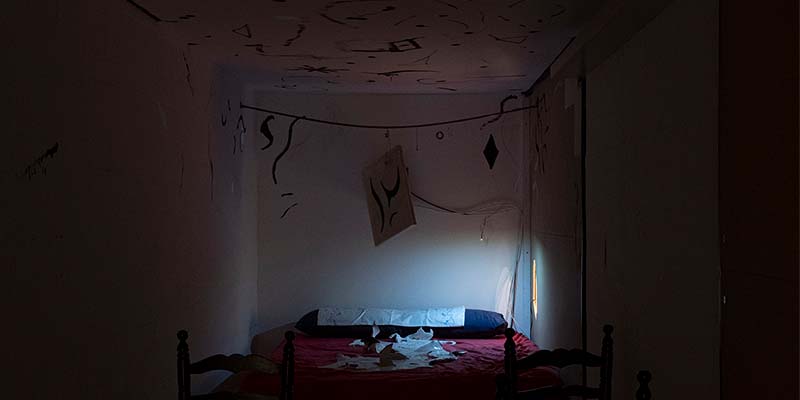 “On 18 April 2022, coinciding with the last day of Isabel and Easter Monday, I spent the night at the Espai 13, thus reliving in a certain way that night in 1978 when the ceiling of my grandmother’s room collapsed with me below, which was the starting point for Isabel. As soon as I arrived at the Fundació Joan Miró, I found a broken baby carriage at the door; Martina, who was with me at the time, took it to the rubbish container. At 8 pm we entered to be authorised and to review the terms of security (during the time the exhibition was up I had time to get to know all the security staff at the Foundation). Once authorised and informed of the protocols, we went down to the Espai 13. 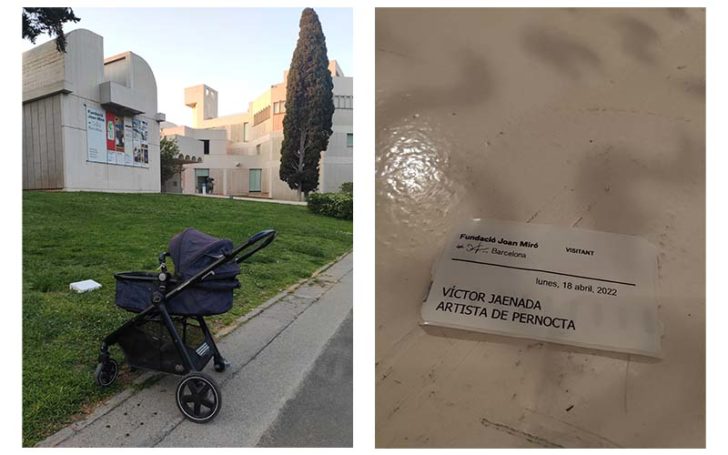 I had various expectations about spending the night there: reliving that night in 1978, as a kind of catharsis; documenting and better understanding the exhibition itself, articulating it for myself; writing something; seeing something; and a few things more. The fact is, after wandering around the gallery for a while, I sat down alone and thought about doing a sort of open, semi-automatic poem on the wall, letting myself be its vehicle. What ended up happening is that after a few seconds of trying to write on the wall, I immediately shifted over to a charcoal drawing. Fifteen minutes later, all that stopped. It turned out that I had added, at the last moment, a new layer to the show. What had passed through me was not poetry; indeed, I think I had been possessed by the spirit of Joan Miró, as a sort of expression of gratitude from the artist. 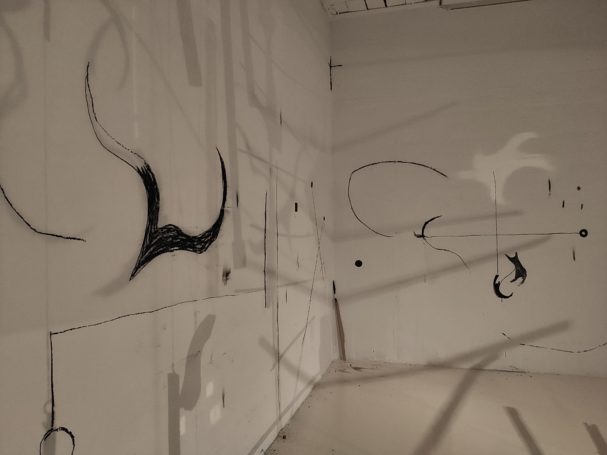 After this intense creative process, I went to wash my hands (every time I wanted to leave the exhibition gallery I had to contact security). When I got back to the space, I trimmed my nails (expanding my archive) and made a live video on Instagram of the action, doing it as well for the depressing 2.0 advertising, although my main concern was to document it on video. And then I started to meander about the space. In fact, I did not feel like going to sleep nor felt like doing anything else; all my body seemed to be asking me was to immerse myself in that exhibition one last time, completing myself with it. I felt that by uninstalling it I would be losing a limb, but there was no other option. I’d say it was around midnight, more or less.

Then I began to get ready to spend the night. I took the ceramics off the bed and put my pyjamas on, and my slippers. I had a bottle of wine in my backpack, but really did not feel like drinking. I suppose that earlier that same day I had done something early and was tired, I don’t know if I was with the girls or on my own. Whatever it was, I went to brush my teeth.

I lazed about the room a little while longer, making videos and taking pictures of everything, holding out a bit longer against its disappearance, which would take place the following day. Half bored and half dazed, I went up to speak with the security man for a while; it must have been 3 am. I went back downstairs, wandered around a little more, and finally got into bed, with a small blanket on that barely covered me, like ambulance issue, with those nursery rhymes and marble around my head (from the ceiling that had fallen). But of course, there was no way I could get to sleep. On top of that, more light came in than I expected through the hole I had made in the wall, between the bed and the night table. I remember trying to finally sleep by listening to a podcast, as I often do at home—this same bed was the one I had brought from home—but even then it didn’t work. Along the hallway where the bed was, I had hung a large piece of foam, from the packaging for the ceramics that substituted my body, and that was an odd presence, making it almost impossible to get to sleep there.

In the end I dozed off and got about four hours of rest. To do so, mind you, I had to turn the nursery rhymes down, remove the marble and cover up the hole in the wall. I awoke around 8. I don’t remember what I was dreaming, and nothing odd happened at all apart from the drawing; I think that night was really a goodbye, like a sort of mourning. I washed my face in the bathroom and got dressed, and when the assistant came we began to uninstall that specific, fluid artefact that was Isabel. So there I was, once again digging my own grave.”