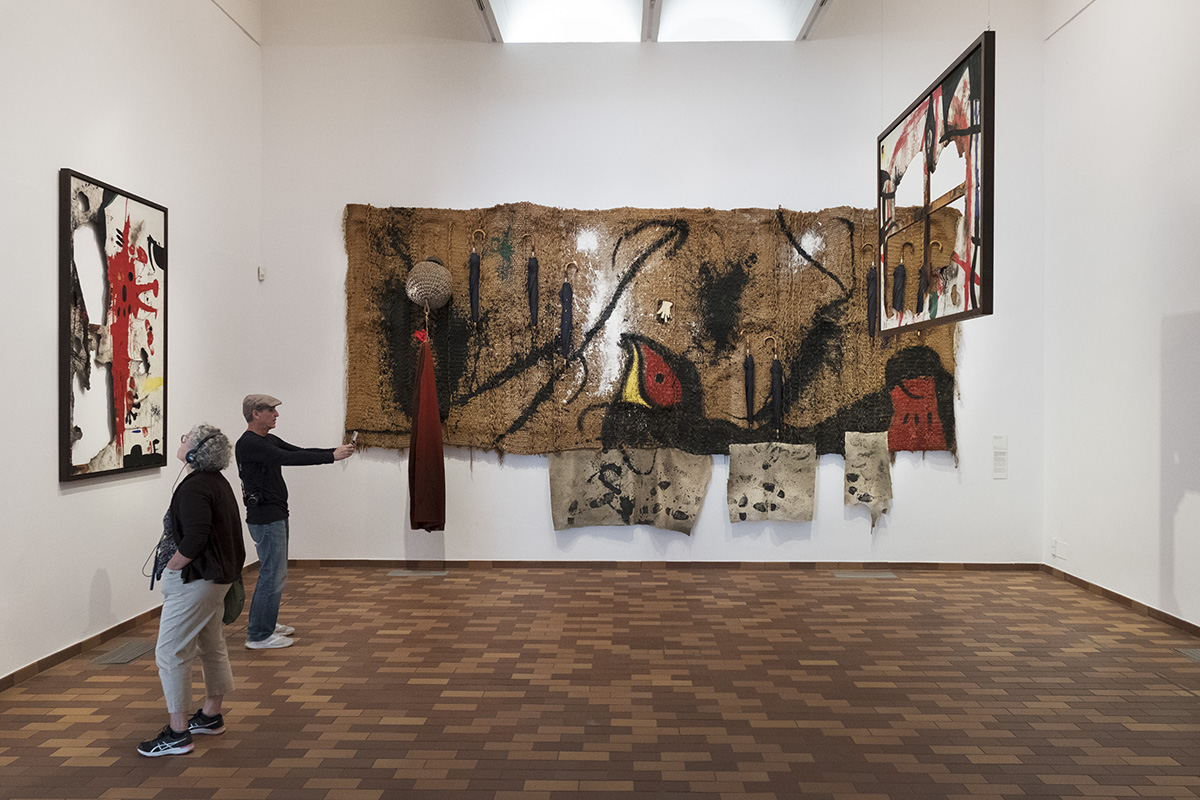 How did Joan Miró begin?
First, he asked his friend Josep Royo to make him an enormous carpet using different rope. His friend could do anything he wanted with this rope, some of which was thick and some thin: knots, braids, weaves or combinations in two-by-two or three-by-three.

Look at the work
Now try to imagine there is nothing else but a mural made of rope. Some things are hanging off of it. Do you recognise anything? Count how many things are the same and look at how they are laid out. What do you see in the middle? Now imagine the rope mural with only these things hanging there.
Look at the part below. There are three pieces of white cloth sewed on. What are the black marks printed on them? How do you think Miró made them?
You can also see painted shapes and figures. What are they, or what do they look like?
Now the last thing: there are white and black paint stains that Miró did not do with a brush. How did they get there?

Did you realise there's a ball of rope with a piece of red cloth hanging off it? This is called a fender. Fenders are put on the sides of boats to protect them from getting hit by other boats or by the dock.

Every piece tells a story. What story do you think Miró is telling this time?

Do you want to know the title Miró gave it?
Click here.

Have you ever drawn, painted or done a collage on a wall, and it stayed there forever? How about on a large piece of paper that was hung on the wall for a few days? If you did this, then you have done a mural, either permanent or ephemeral. Now we invite you to create a mural using a piece of cloth, as if it were a large wall.

1. Ask someone you know (a relative, neighbour or friend) for a large piece of cloth or some kind of textile, like a blanket for the couch, a wraparound skirt, a window drape, a large towel, a carpet or a mat. Tell this person that you are going to do an ephemeral mural, that you will take care of the cloth and won't damage it.

2. Think of a subject and choose the materials and objects that go with it.

3. Lay this cloth out on the floor, and on it create a composition with the material you have chosen. You can also include cut-out letters, coloured wool or rope to make shapes.

4. Think carefully how to place these things. Try options out, moving the pieces from one place to another, as much as you need, to find a layout that you like. You don't have to use a lot of different things, but should think about what you want to put on the cloth and where. A good composition is not the one with a lot on it, but one where everything has been well placed.

5. What would be a good title?

6. Go up a chair or a ladder and take a photograph of the result.

7. When you return the piece of cloth to the person who gave it to you, share the picture you took of your creation.

Material: relatively large piece of cloth, various objects and materials, coloured wool, rope and a cell phone with a camera.

Activity for all ages