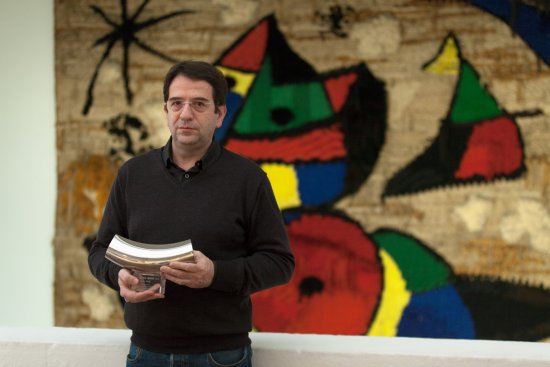 Ignasi Aballí has been named winner of the fifth edition of the award organised by Fundació Joan Miró and Obra Social "la Caixa".

The Catalan artist accepted the Prize, one of the most prestigious and generous contemporary art awards in the world, at a ceremony held at Fundació Joan Miró.

In addition to the cash prize of 70,000 euros, the winning artist will be invited to present a monographic exhibition at Fundació Joan Miró in Barcelona in Spring 2016, and then at CaixaForum.

The jury statement for the 2015 Joan Miró Prize praises Ignasi Aballí for "his ongoing reflection on the limits of painting and representation, his meticulous attention to the significant consequences of the tiniest changes in strategies of resignification, and his role as a mentor for younger artists."

Ignasi Aballí (Barcelona, 1958) studied Fine Arts at the University of Barcelona. His work has been shown at Fundació Joan Miró, MACBA, Museo Nacional Centro de Arte Reina Sofía, Museo Serralves in Porto, Ikon Gallery in Birmingham, the Drawing Center in New York, ZKM in Karlsruhe (Germany), the 2007 Venice Biennale, and galleries and art centres in Madrid, Barcelona, Mexico, Belgium, Brazil and China. Aballí’s work progresses in two seemingly contradictory directions: an exploration of minimal activity on one hand, and fiction as raw material on the other. After starting out as a painter, Aballí opened up to other actions and conditions of production: the effects of dust or sunlight on materials, the compilation of information from newspapers, and images that are reproduced endlessly. His works are made anew with the materials and the conditions of perception and conditions in which they are shown.

The prestige of the organising institution - Fundació Joan Miró - and the financial support of Obra Social "la Caixa", which provides the cash prize of 70,000 and covers the cost of producing the exhibitions, have made the Joan Miró Prize one of the most prestigious art awards in the world, in spite of its relatively short history. In addition to the cash prize of 70,000 euros and an invitation to exhibit his or her works at Fundació Joan Miró in Barcelona, the winning artist of each edition also receives a trophy created by André Ricard. The acclaimed designer drew inspiration from the spirit and identity of Joan Miró and of the Foundation to create a trophy that reflects the desire for innovation and the vitality of the Prize and of the artist whose name it bears.