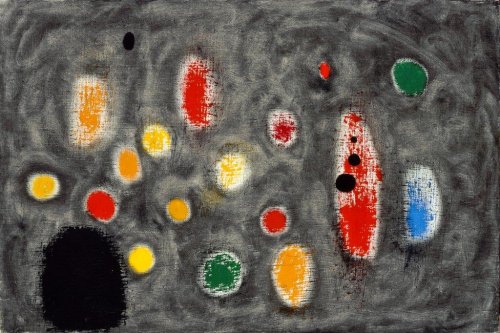 Sara Puig Alsina, President of the Fundació Joan Miró’s Board of Trustees, wishes to give her sincere thanks for the support and generosity shown by the artist’s family, and has announced the arrival, at the end of this year, of this new set of works to be shown in the spring/summer of 2022. At a special meeting, the Board celebrated and acknowledged the significance of the decision taken by the Miró family. At the same meeting, the Board welcomed a new Member, the artist Ignasi Aballí.

The new group of works comprises 54 pieces by Joan Miró –44 paintings, 9 drawings and 1 ceramic piece– and 5 works by Alexander Calder –1 painting and 4 mobiles– which will serve to reinforce the discourse of the Collection and reconstruct the artist’s legacy. The pieces that make up the Fundació Joan Miró Collection originally came from the gift the artist made when the museum first opened in 1975, and which has grown over the years through other donations and long-term loans added by his wife Pilar Juncosa, to whom the artist had given one piece from all the series he produced throughout his career; by Joan Prats; and by several members of the Miró family. Along with other long-term loans from public and private collections, together they make up a living, complete, and diverse collection.