The Fundació Joan Miró participates in the transmedia project Mironins. The research and innovation project has the aim of creating pioneer forms of connecting to, participating in and learning at the museum through digital technologies.

The world of Mironins and its characters, three drops of paint escaped from Miró paintings, comes to the screen through a children’s animation whose setting is the galleries and emblematic spaces of the Foundation. The series Mironins will premiere in theatres on 3 December and will soon be seen on Televisió de Catalunya, À Punt and Televisión Española. The film has been nominated for the Gaudí Awards and the Goya Awards.

Mironins is being articulated with the idea of generating pioneer ways of connecting to, participating in and learning at the museum through digital technologies. By means of interactive experiences and augmented reality, children and their families are encouraged to learn about Joan Miró’s creative processes and come into contact with their own creativity, exploring and playing at the Fundació Joan Miró.

The project is affiliated with the RIS3CAT Media community and participated jointly by the Audio-visual Technologies Unit of Eurecat, the Universitat Pompeu Fabra (UPF), Cornelius Films, Sfy and Wildbytes. 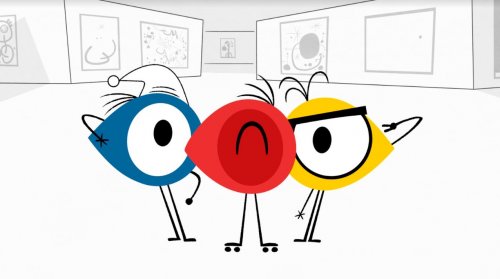