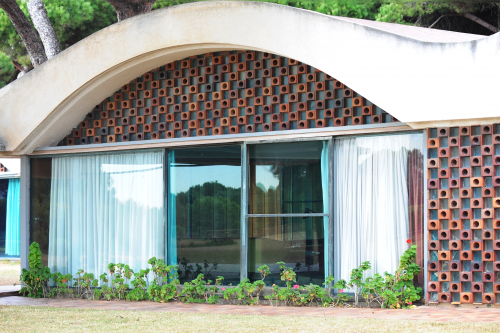 The selection creates a dialogue between the photographs taken by Joaquim Gomis during the construction of La Ricarda - his brother’s house in El Prat de Llobregat - and the images of this emblematic example of rationalist architecture captured decades later by the artist Magels Landet. La Ricarda: Two Views can be seen in the space devoted to photography in the foyer of the Fundació Joan Miró until 30 September 2018.

Known as La Ricarda, the summer residence of Ricard Gomis in El Prat de Llobregat was designed and constructed between 1949 and 1956 through a series of communications by letter between the Gomis-Bertrand family and the architect Antoni Bonet, who was in exile in Argentina. The result of this collaborative process was one of the finest examples of rationalist architecture in Catalonia. Crowned by an iconic undulating roof, the house blends perfectly into the landscape, sitting amid pine trees close to the sea. Opened in 1963, Casa Gomis quickly became a special place to create, exhibit and meet for the cultural avant-garde of the time.

Joaquim Gomis photographed his brother’s house in El Prat de Llobregat while it was being built. Once it was finished, he also documented the cultural soirées that were held there. Decades later, the sculptor Magels Landet has captured details of the house, now uninhabited, but a legendary symbol of Barcelona’s architectural and cultural modernity in the 1960s.