Miró-ADLAN: An Archive of Modernity (1932-1936) reconstructs the key role of the group of artists and intellectual known as ADLAN (Amics de l'Art Nou [Friends of New Art]) in introducing modernity to the Barcelona of the 1930s, during the years of the Spanish Republic. While in major European cities avant-garde movements had the support of critics and collectors, here modernity needed the impetus of an enthusiastic group that sought to regenerate Catalan culture and adopted Joan Miró as its leader in the promotion of new art.

The exhibition presents documents and ephemera from the ADLAN archive, held in several public and private venues, primarily in the COAC and Fundació Joan Miró archives. ADLAN's secretary Adelita Lobo played was an essential figure in documenting and preserving the materials in this archive; invitations, notebooks, and posters became objects of memory and now allow us to recreate the group's key role in building modernity in Catalonia, organizing more than fifty events across all artistic disciplines - painting, architecture, music, dance, circus, photography, film, etc.

The show also features a selection of pieces from the five ephemeral exhibitions that Miró held in Barcelona to offer the members of the cultural group a preview of the works that would then travel to Paris, New York, or Zurich. These exhibitions, open only to ADLAN members, provided a laboratory or a test run for the artist and reveal the experimental nature of his work and his persistent collaboration with others involved in the group.

The preservation of the documents on display was key for being able to recreate the places, the events, and the individuals who made this renewal of the concept of modern culture possible; some of these people, belonging to the Catalan petite bourgeoisie, are Joan Prats, Josep Lluís Sert, Adelita Lobo, J. V. Foix, and Sebastià Gasch, just to name a few. ADLAN's influence spread among artists, architects, writers and musicians from Barcelona, particularly during the post-war years and during the 1970s. The close connection between ADLAN and GATCPAC (Grup d'Arquitectes i Tècnics Catalans per al Progrés de l'Arquitectura Contemporània [Group of Catalan Architects and Technicians for the Progress of Contemporary Architecture]) forged a view of modernity associated with architectural rationalism and visual surrealism - which is precisely what led to the creation of the Fundació Joan Miró.

The exhibition is part of the Miró Documents series, whose aim is to use the Fundació's archive to further explore certain aspects of Miró's work.
With the complicity of New York University, Col·legi Oficial d'Arquitectes de Catalunya and Museu Picasso de Barcelona.
The conservation of the collection and its presentation has the generous and continued support of Fundació Vila Casas.

To find out more

The Fundació Joan Miró Archive: Awareness of and Responsibility for a Legacy

The Barcelona GATCPAC. A Tour of Avant-Garde Architecture

The Barcelona GATCPAC. A Tour of Avant-Garde Architecture is an itinerary through Sant Gervasi that allows viewers to discover the development of architecture throughout the twentieth century and set it against the backdrop of the key events that unfolded on the political, social, cultural and artistic fronts in Barcelona.

about "The Barcelona GATCPAC. A Tour of Avant-Garde Architecture" 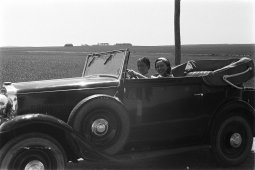 The Role of Women in Barcelona in the 1930s

Panel discussion about the social status of women and their rising presence in the workforce during the Second Spanish Republic and the Spanish Civil War, in connection with the exhibitions Miró-ADLAN. An Archive of Modernity (1932-1936) at the Fundació Joan Miró and Margaret Michaelis. Five Days in the Red Light District? at the Arxiu Fotogràfic de Barcelona.

about "The Role of Women in Barcelona in the 1930s" 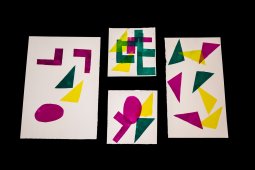 A pochoir exhibition at home

Coinciding with the exhibition Miró-ADLAN. An Archive of Modernity (1932-1936), we want to offer you a special Creative Families activity based on the works that Miró made with a pochoir or stencil technique. We also encourage you to set up your own little exhibition at home (in the entrance, the dining room or in a bedroom, for example), design an invitation, and invite whoever you want to come and see it.

about "A pochoir exhibition at home" 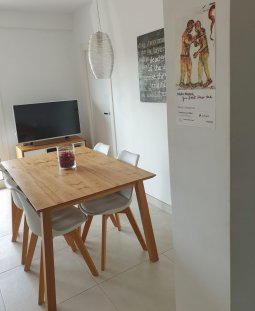 Art Without an Aura

Printed reproductions are an example of the democratization of art and its integration into everyday life. Think about it: you probably have reproductions of works of art at home, such as postcards, posters or prints. We invite you to take photographs of places in your home where you have posters or postcards on display with reproductions of famous works of art, and then share them on social media using the hashtag #MiróADLAN.

about "Art Without an Aura" 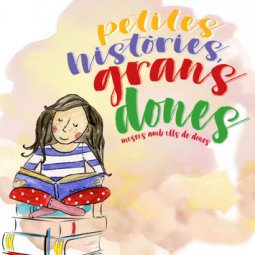 Nine museums are offering a dramatized storytelling activity that focuses on women who are linked to the history, the collections, or the contents of these museums. This year, the Little Stories, Great Women series will be held online again. The woman featured by the Fundació Joan Miró will be Adelita Lobo, the cultural organizer, secretary, treasurer, and archivist for ADLAN (Amics de L’Art Nou [Friends of New Art]).

Performance by artist Ivo Sans during a seven-hour work day session, accompanied by three collaborators as part of the Sampler Series, organized by L’Auditori de Barcelona and focusing on new music.

about "Standing and Sitting" 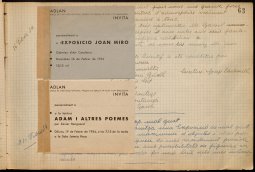 The curators of the exhibition Miró-ADLAN: An Archive of Modernity (1932-1936) will be joined by Anne Umland (MoMA) and Marko Daniel (Fundació Joan Miró) for an hour-long conversation about the position of Joan Miró within the history of modern art, his role in promoting new art in Barcelona and New York, the spaces in which his work was exhibited during the 1930s, and the importance of archives (personal and institutional) in mapping the relations between artists and the local contexts in which they produced and exhibited their work.

about "Joan Miró, Modern Art and the Legacies of (Art) Historical Archives"

The Fundació Joan Miró is participating in the Per amor a les arts series with proposals along the lines of its programming. This session, linked to the exhibition Miró-ADLAN. An Archive of Modernity (1932-1936), could easily have been programmed by the members of ADLAN (Amics de l’Art Nou [Friends of New Art]), who, as so many European intellectuals of their times, were fascinated by the origins of film.

about "ADLAN and Film"